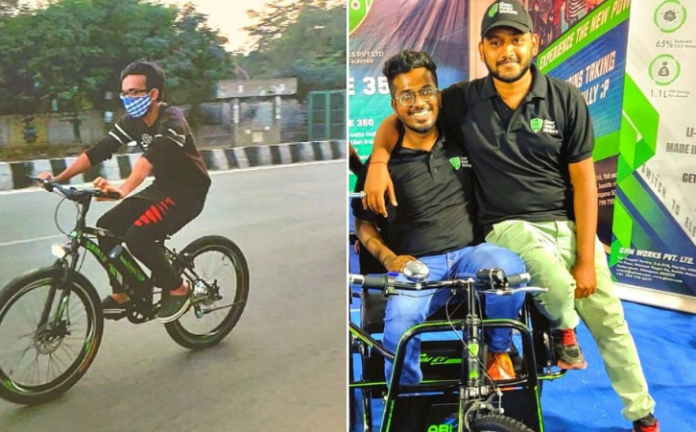 The biggest reason why electrical vehicles are growing all over the world. Is that the engines we use release a lot of harmful gases in our nature which are very harmful for any human and animals. In addition, due to the limited quantity of our natural resources such as petroleum is being used, we cannot use it for a long time.

Batteries used in electrical vehicles are very high. It can charge fast and can be used for a long time. After the battery goes dad, we can re-use these batteries. Because a lot of batteries are made up of acids and a variety of reusable substances.

To increase this trend in India, a startup in Hyderabad has prepared an e-bike that can run for more than 100 kilometers, after charging once. The team members who made this E-bike have said that they are also involved in making auto-rickshaw to an electrical vehicle work tomorrow and will soon bring such technology, due to which we will be able to make auto-rickshaws also an electrical vehicle.

The Hyderabad-based startup has a brand for making electrical vehicles. So let’s know how their founders built their E-bike and started this company.

Nikhil, who is the co-founder of this company. Started their startup journey at the engineering college in the second semester. He thought that after we completed our engineering, we do not want to get stuck in that 9 to 5 job, because of which he opened his own coffee shop and After all authority and permissions, he opened a coffee shop with his friend. Which started growing very fast.

After some time, his shop started getting very crowded. Due to which many students started getting upset because he could not stay at the shop for much longer due to his college time. After which he also launched an app so that any student can book his coffee in advance by entering his college ID and mobile number and can come and take their coffee.

The coffee shop was running very well and after that Nikhil started getting more interested in electrical vehicles as the background of Nikhil was of a mechanical engineering. When he went for a trip to Pink City Jaipur, a college senior met him at the same time. And Nikhil’s electrical vehicle desire was very high and his senior also had an mechanical field, due to which both of them started to have a lot of desire in this project.

Today, along with Nikhil and his college senior as well as many friends, he builds his own company who builds electrical vehicles. Now more than 100 units has sold by this startup and has earned more than 60 lakh revenue. Members says that now we are working to improve the electrical vehicles of two and three wheelers and soon we will launch this project.