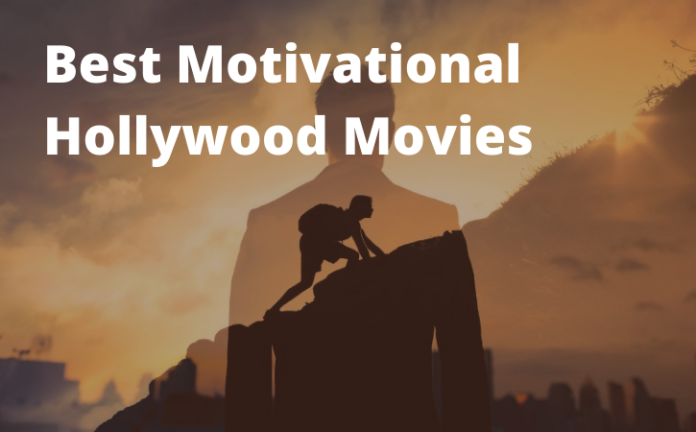 If you want to be successful in your life, then many such movies have been made by inspiring real successful people so that the way they have succeeded in their life, there are many people who want to be successful. What are the things he experienced in his life, that he has achieved such a big achievement. In this article, I have told the list of some Best Motivational Hollywood Movies, That Will Inspire You.

There are so many people in this today’s competitive generation who, despite doing very hard work, they do not get success and they search many videos, movies on the internet for motivation.

We get to see a lot of ups and downs in our life. But, sometimes we feel that whether we are on the right track or not, a lot of confusions are in the mind, sometimes depression and stress also comes at that time. A lot of movies have been made that gives us motivation and inspiration.

Gandhi is a biographical film released in 1982 which tells about the life of Mahatma Gandhi. Mahatma Gandhi walked the path of non-violence and he was against violence. How did he get rid of British rule without any violence?

From this film you will get inspiration that how you can win without violence. Also, here you will get to see hard work that how a person dedicates his whole life to his peoples. The film was released in November 1982, which is a UK based movie directed by Richard Attenborough and written by John Briley.

127 hours is a biographical movie based on a true incident. How a boy goes for an adventure and he is stuck between the big stone. He is stuck in it for the entire 127 hours. The film covers the entire story closely about how he comes back alive.

After watching this film you will get a lot of inspiration. That how you can achieve your success despite enduring your pain, as well as how the boy would cut his own hand to get his life. If he does not do this, then he dies at the that place. It is a very big learning that you get a great achievement in life, after your sacrifices, the bigger sacrifice you give in life, life will give you such a big success.

A biographical movie based on the true event of Cinderella Man directed by Ron Howard, the movie was released in June 2005. The movie has also received a wide award, some of which include the Academy Award nomination, Best Supporting Actor Award have been found.

A common-man hero, James J. Braddock (Russell Crowe), a.k.a. the Cinderella Man, was to become one of the most unexpected sporting icons in history during the Great Depression. The starving ex-prizefighter was apparently as broken-down, beaten-up, and out-of-luck by the early 1930s, as was most of the rest of the American population that had reached rock bottom. His career seemed to have been ended.

The only thing that mattered to him, his family, was in danger, and he was even forced to go to Public Assistance, because he was unable to pay the bills. But James J. Braddock never relinquished his resolve deep inside. He wanted an elusive dream to come true, motivated by passion, honour, and an enormous dose of grit.

Rocky Movie is a sports drama movie based on an inspirational incident, directed by John G. Avildsen. It was released on November 21, 1976, showing the story of a boxer. It states that there is a boxer who is debt-ridden and he boxed to eliminate his duty. So, that he makes some money to fill his debt and maintains it. This movie has been highly appreciated by the people and it has been many awards worldwide, along with this eight parts has been released.

All the parts are listed below.

This movie is a true-event biographical drama that was released in September 2007 and was directed by Sean Penn. This movie is taken from the Alaskan wilderness adventure of college grad Chris McCandless.

The wilderness has a very unique allure for McCandless and many others of his ilk. McCandless sees the wilderness as a purer state, a place free of modern society’s evils, where someone like him can discover what he really is made of, live by his own laws, and be totally free.

It’s A Wonderful Life is an American Christmas family drama film that was directed and produced by Frank Capra, released in December 1946. This film is one that lets us have relationships of meaning. When an angel comes down as a response to George Bailey’s prayer that he was not born, he starts to see how his loved ones have been affected by him. It’s A Wonderful Life, set in the Christmas season, is truly a wonderful watch, leaving us encouraged by its simple but captivating storyline.

It’s A Wonderful Life discusses even broader concepts related to what is usually expected to affect the holidays: the ideals of fundamental goodness and sacrifice, the gift of fellowship, the dangers of greed and commercialism, the sense of community and belonging that allows us to feel genuinely linked in a society.