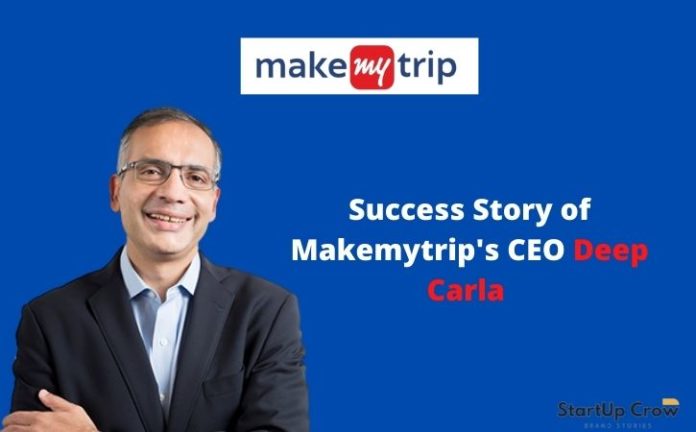 Success Story of Makemytrip’s CEO Deep Carla – Today, whenever we plan to travel in the era of technology, we first resort to the Internet for flight, rail, bus, and hotel tickets so that they can make their travel easier, but to travel before 2000 To book tickets and there were no options for booking a hotel in another city because then technology was not so much evolving, nor was it so much a website that can be booked online tickets and hotels.

But for the solution of this problem and for the people, Deep Karla started the MakemyTrip company and now it is one of the most successful companies in India.

Let’s know about the success story of Deep Karla

Deep Karla completed his graduate studies in the year 1987 from St Stephans College of Delhi. After this, he got the degree in Business Management from IIM Ahmedabad.

After completing his studies, he chose the banking sector for the first job and he worked for about 3 years in ABN Amro Bank and left his job in 1995.

After this job, he thought of doing something different from the job and understanding what they have to do next. However, during this break, he also received a lot of jobs in the corporate world.

Meanwhile, his mind came to take care of doing something bigger through online services.

This time he chose such work, in which he had to face a lot of challenges, but he got a chance to understand his skills, he joined the US Based Company AMF Bolling and he took the work of bringing India to AMF Boling Inc.

At that time, the American company in India was difficulty raising investment for Boling Eli.

However, after a lot of struggle and challenges, he worked for 4 years and then said goodbye to this work. Deep Karla was not happy with his job and was planning to make some big and wanted to start his business like MF Bolling.

After this, in 1999 he joined again in GE Capital. During this time, he had also been guessed about the power of the Internet, and then he thought about doing big business through the internet. This was the round when the Internet was spreading its feet in a traditional country like India.

So seeing this, he left his job again, and now he started thinking about business. After this, Deep Karla studied the Indian tourism industry, he saw that online travel tickets in our country are not booked. Then what was he understood that he would work in this direction. And in 2000, Deep Kalra launches MakeMyTrip.com website to start the online ticket booking service.

Let us tell you that Make My Trip Travel Company is also running 51 retail stores in 47 cities of India. This company has made its place among people in a short time. At the same time, the MakeMyTrip app will easily be seen in smartphone users. This travel company has been established today as a successful startup.

Although in the early round, this company was not getting so good response in India but later the company’s income increased and 2016 – the company’s revenue increased to $ 62 billion in 2016 and today the company employs many thousands of people.