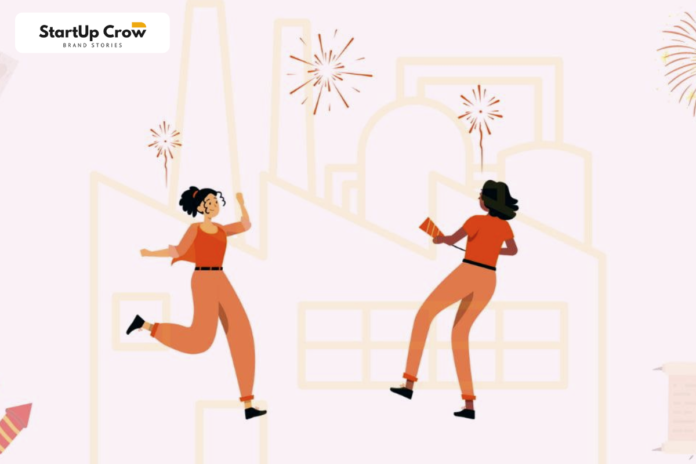 The Diwali festival is celebrated to greet the return of Lord Rama to Ayodhya. Tulsidas epic Ramcharitmanas detail the celebration, however there is no mention of the exploding of firecracker in Ayodhya. In fact, a specific verse in its creation says: There was a sound from heaven, all of Ayodhya was decorated with flower, a specials fragrance spread through the streets.

It was the Chinese who discovered firecracker, almost by accident, between 2,000 & 2,200 year ago. Local folklore says that the Chinese burned bamboo to celebrates the Lunar New Year. Air trapped in the bamboo handle caused it to expand & explode when it caught fire, a good way to ward off evil spirit. The sound emanating from that is believed to be the original firecrackers. (Diwali)

Following that sound, the alchemist of the time experimented with various chemical & invented a mix that added more sound to the bamboo pop. This mixture was a precursor to today gunpowders, which was then perfected over the next century.

From there, the technology of gunpowders & associated pyrotechnics entertainments mixtures came to India via the Arabs.

The late historian P.K. Gode ​​wrote and published an accounts History of Firework in India between 1400 and 1900 in 1950. In the accounts, he states that the use of firework in the celebrations of Diwali, which is so common in India now , must have come into existence. after 1400 AD C., when gunpowder began to be used in Indian wars. The earliest account of the use of firework in India are recorded around that time. Kautukachintamani, a Sanskrit volume by Gajapati Prataparudradeva 1497-1539, mention formula for making firecracker. (Diwali)

Timeline of firecrackers use in India

Abdur Razzaq, the ambassador of the Timurid Sultan Shahrukh in the court of Deva Raya II of the Vijayanagara kingdom mention one of the earliest account of firework in 1443. His description of the Mahanavami festival mention: One cannot without going into great detail mention all the various types of pyrotechnic & firecracker & various other arrangement that were on display.

Throughout history, there are several stories about the use of firework for different reason. In 1518, firework were used in Gujarat to celebrate wedding. In 1609, the Sultan of Bijapur, Ibrahim Adil Shah, spent 80,000 INR on firecracker. (Diwali)

For a few centuries, the use of firework was limited to royalty and represented a sign of prosperity & greatness during the Mughal era. Weddings and coronation used to be celebrated with firework. It was only in the 18th century that the use of firework by the masses began when the Maratha rulers began to organize firework display for the general publics.

The Firecracker Industry in India

Indian industries started manufacturing firecracker only after independence when the first firework factory was established in Kolkata. Sivakasi in Tamil Nadu became the center of firecracker manufacturing. Two brother, P. Ayya Nadar & Shanmuga Nadar established two factories that first made flares, more popularly known as phooljhadi. Even today, the city of Sivakasi has more than 6.5 lakh families who depend directly or indirectly on this industry for their livelihood.

Like any other industry, the firecracker industry also suffered during the hit year of 2020. For an industry that is worth an estimated INR 5,000 crores, it produced only INR 3,000 crores worth of firecracker that year. However, the industry woes continued in 2021 when several states including Odisha, Rajasthan, Delhi & Haryana announced a full or partial ban on firecracker. (Diwali)

In 2021, the value of manufactured fireworks was close to INR 1500 crores, reduced by 50% compared to the previous year. Even with less productions, the industry witnessed an estimated loss of INR 500 crore.

T. Kannan, director of Sree Balaji Firework & general secretary of the Indian Association of Firework Manufacturer, said: If the ban continues for the next few year, we would not have any definite policy to manufacture. We were not prepared for the ban in these states. Firecracker create pollution in people minds and not much in reality.

In the future, if the firecrackers industry is to survive and prosper, it must go through a transitions to become environmentally sustainable, socially inclusive & contribute to decent works for all those who depend on it. The industry must be supported by favorable governments policies, promote innovation and be based on a consistent frameworks. (Diwali)

The future of the firecrackers industry depend on several factor. However, there is no evidence that it has any historical connections with the celebration in Ayodhya on the arrival of Lord Rama. The only biblical evidence is the lighting of diyas that reflected the joy of the people of the city.