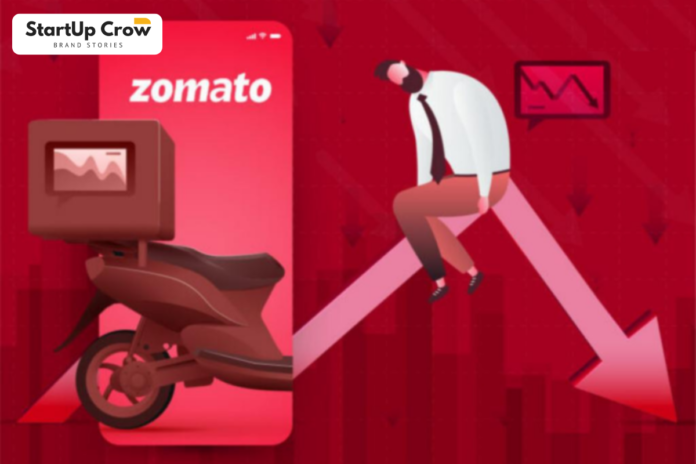 Zomato shares closed 6% lower on the BSE on Thursday to settle at INR 53.90. The drop in share price has wiped out more than 12,000 Cr of investors’ wealth in the last four trading sessions. Last Friday, Zomato announced the acquisition of fast trading startup Blinkit in an INR 4447 Cr stock deal.

Shares of food tech startup Zomato continued to fall for the fourth consecutive trading session, falling nearly 6% on the BSE on Thursday June 30 to settle at INR 53.90.

The drop in share price has erased more than 12,000 Cr of investors wealth in the last four days. According to the BSE, the current market capitalization of the startup is INR 42,439 Cr.

Shares of the Gurugram-based startup have been on the decline since the announcement of its INR 4447 Cr acquisition of fast trading startup Blinkit.

Zomato shares have plunged more than 23% in the last four trading sessions, pointing to negative investor sentiment surrounding the acquisition.

Market corrections weighed on Zomato shares as they hit record lows on stocks in May. However, the shares began to recover in late May and have been on an upward spiral ever since. However, fortunes changed after the deal was announced.

Separately, Kotak Institutional Equities Research downgraded the stock to ‘add’ from buy on Wednesday, cutting its fair value estimate to INR 77 from INR 83.

From an all time high of INR 169.10 in November last year, the stock has plunged more than 68% in the past seven months.