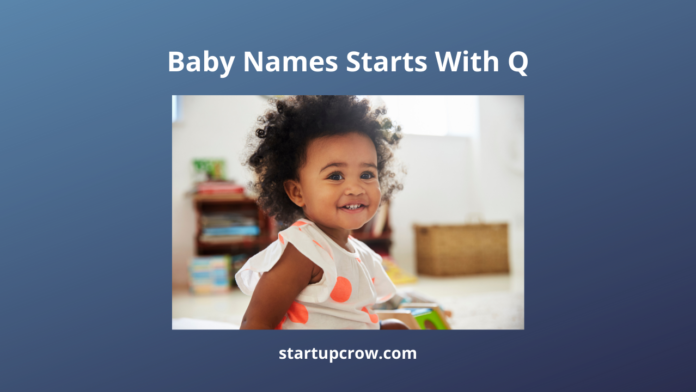 Having a baby boy is a huge and life-changing event that will undoubtedly offer both joy and challenges. The first is, of course, settling on a name for your child, which he will endure for his entire life. The most important thing to remember is that your baby’s name is one that he can be proud of.

Famous Boy Names That Begin With The Letter Q

Boy names that begin with the letter Q are indeed unique! Quinn, Quincy, Quinton, and Quentin are the only four Q-starting boy names currently in the top 100 in the United States. Arabic Qasim is among the Top 100 boy baby names in England and Wales, along with Quinn and Quinton.

The letter Q is one of the few letters that is truly special. When it comes to baby names, it’s one of the most overlooked letters. There are a lot of great names that begin with this letter. Choose the famous boy names that start with Q from the list given below by CocoFinder. Make a wise choice and give him a name he’ll proudly wear for the rest of the time.

The name Quentin is a Latin boy’s name that means “fifth.” Quentin is a unique name with a lot of personalities that is related to the Latin number five. It is by far the most delicate and usable of the Latin birth-order names, masculine as well as fashionable and distinct.

In 1823, Sir Walter Scott published Quentin Durward, a story about a young upper-class Scotsman, and Quentin Compson appeared in William Faulkner’s The Sound and the Fury as both a male and female character. Movie filmmaker Quentin Tarantino, eccentric British novelist Quentin Crisp, and Roald Dahl illustrator Quentin Blake are all real-life bearers.

Quinn is an Irish surname that is essentially an anglicized version of the earlier Gaelic Cuinn, which means Conn descendent. Conn, on the other hand, is an Irish name that means “leader, boss.”

Quinn became famous as a forename in the United States and is now widely used by both men and women. They are intimidating and have a compelling nature. These individuals are upbeat, full of self-expression, and frequently emotional. Their excitement overflows, and their dazzling enthusiasm attracts a crowd.

Quinn is still considered unisex in America but predominantly masculine in England and the Netherlands and feminine in Canada. Quinn’s inclination toward the feminine has shifted due to a female cheerleading character on the television show Glee. A movie, a band, and a Bob Dylan song are all titled “The Mighty Quinn.”

Quinton is widely thought to be a renamed Anglo-Saxon surname derived from one of two probable sources. Quintone was first documented in the Domesday Book of 1086 and is derived from the Olde English terms “cwen,” meaning “queen” and “tun,” meaning “enclosure, property, or land.” Quinton is also a revised respelling of the Old Roman name Quintinus, derived from the Latin word “Quintus,” which means “fifth.”

Quincy is an English masculine name derived from Quintus, which means “fifth” in Latin. Quintus was the Latin name given to the child born fifth in the birth order throughout Ancient times.

John Quincy Adams, the sixth President of the United States, was given this name as a middle name. He was named after his mother’s maternal grandfather, Colonel John Quincy, who founded Quincy, Massachusetts. Another link is the long-running television show Quincy M.E. Quincy’s peak success came in 1977, but it still has a lot of life in it.

Quintin is a variant spelling of Quintinus, an Old Roman surname derived from the Latin word “Quintus,” which implies “fifth.” Saint Quentin, a 3rd-century Roman citizen who was killed in Gaul for preaching Christianity to the pagans, was one of the first and most famous bearers of the name.

It was customary for parents to name their children after well-known saints as a protective safeguard in medieval Europe. In the 11th century, the Normans brought the name Quentin to England, but it has remained most prevalent in France and Belgium. Americans and Canadians commonly spell Quintin.

Quinten is a Dutch version of the Roman name Quintinus, which is derived from the Latin word “Quintus,” which means “fifth.” The name has been passed down through the generations, and it was traditionally given to the fifth kid in the birth order.

Quinten describes individuals who are strong leaders and competitors. They are willing to take the initiative and risk their lives. They are confident in their abilities to accomplish and are unafraid to face challenges.

Quinlan is the next name on the famous boy names list. Quinlan is an Irish baby boy name that means “slender, descendent of Caoinlean.” Quinn is an Irish last or first name mix that can make a youngster feel unique while still maintaining the common person nickname. Ben Stiller and Christine Taylor misspelled Quinlin, their son’s name.

Quenton is a boy’s name derived from the Latin name Quentnus, which is a derivative of the Roman name Quintus, which means the fifth. The fifth-born kid was customarily given the name.

Naming a baby is a holy process, and every parent strives to give their child the most outstanding name possible. Qasim is a lovely Muslim boy’s name that parents like. This name is not only adorable but also profound. People in Pakistan usually choose a beautiful Boy name for their child to give him a distinct identity. Its primary source of origin is Arabic.

Qasim’s meaning is “charitable, giving; one who provides to the people,” which explains the name’s expected impact on the behavior. The son of the Islamic prophet Muhammad was the first known bearer of the name.

Quang is a Vietnamese boy’s name. Its definition is “clear.” This name implies that you are a compassionate and loving person. You enjoy instructing people and assisting others. You have sympathy for others and are concerned about their well-being. The disadvantage is that you may become concerned and worry excessively. You can be prone to jealousy.

Out of all the letters in the alphabet, the letter Q is frequently overlooked by parents when selecting a baby name. The letter Q equals eight in numerology, which denotes consistency, uniqueness, courage, and prosperity. Determination, willpower, loyalty, reliability, and trustworthiness are all qualities that Q boys possess.

They have a philosophical nature and a strong desire to understand everything there is to know about life and its meaning. Their fundamental purpose is to improve the world and humanity as a whole.

As a result, you have a variety of Q boy names to pick from. They’re one-of-a-kind, wonderfully stunning, and something your son will like and value as he grows older. Before making a final call, make sure you consult this CocoFinder’s list with the essential people and double-check that his name is spelled correctly.

What Are The Solution for Love problems and Love Marriage Problems?

4 Best Type of Watches For Travelers In 2021