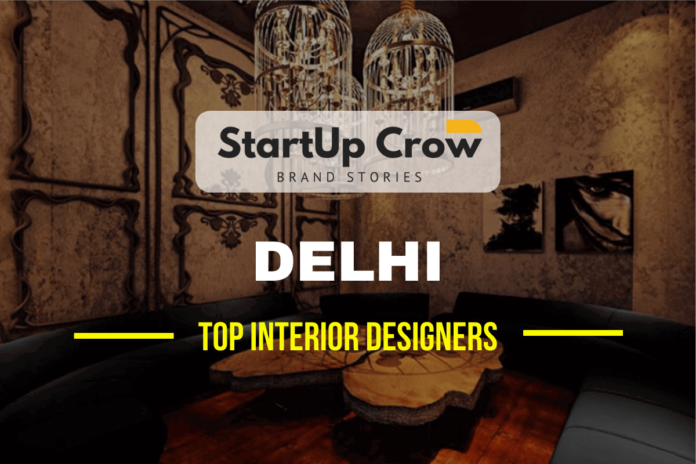 We have all heard of interior decorators. Whether it is a family reunion or an event we attended, in today’s Delhi, interior designers are the hottest and most talked about celebrities in the market and there is a good reason. A good interior designer who has made a name for himself is known for his creative skills that can turn any average home into a dream home in a matter of months. From designing celebrity homes and international spaces to common households wanting a great interior design, a good interior designer is the need of the hour and is everywhere.

But as the number of people choosing to pursue a career in interior design increases, so does the chaos and competition in the market. A quick search for the top 10 home designers in delhi or the top delhi ncr interior designers will result in so many search results that choosing the one that best suits your needs becomes more and more difficult over time. of the day .

So, to clear up your confusion and help you make a choice that suits your needs, in today’s article we will talk about the top 10 interior designers in Delhi and Delhi ncr 2022. Let’s get started.

Sunita Kohli is a name in the interior design industry that everyone has heard of at least once in their research. Based in Delhi, India and the founder of one of the most important interior design companies in India, K2India, Sunita’s name is engraved in history because of the important work she does.

Sunita is an interior designer based on research and its know-how lies in historical architectural design and in particular in architectural restoration. Sunita has been placed in the list of top 10 interior designers in delhi. Her most influential work in industry was in 1985-1989, when she was commissioned to restore and decorate the Office of the Prime Minister, the Colonnade of Parliament, Hyderabad and the Rashtrapati Bhavan (Presidential House) in New Delhi.

Sunita pursued a BA (Hons.) And a Master in English Literature while in college, but has never taken a professional interior design course. Sunita’s greatest achievement to date is that it received the Padma Shri in 1992, after which it played an important role in the manufacturer of exquisite modern and classic furniture.

Shabnam Gupta is a graduate of L.S. Raheja College of Architecture. She works outside Delhi and is the CEO of her brand, Shabnam Gupta. With more than 15 years of experience in the interior design industry, Shabnam is a well-known name among celebrities and those who love Parineeti Chopra, Irfan Khan and many others. She is the winner of the prestigious AD50 2017 Award for the 50 most important and significant architects and interior designers. Shabnam Gupta has been placed in the list of top 10 interior designers in delhi.

If you just type Shabnam’s name into Google, you will be redirected to her personal website and the landing page says it all. She is a Designer. This phrase alone should be enough to describe her role and thoughts in the interior design industry. If this is not enough for you reads below.

Some of her most recent work includes designing dreams space for Rani Mukerji & Kangana and many more. She is also the founder of 2 brands, first brand The Orange Lane and second brand Peacock Life To learn more about her, take a look at her website here: Shabnamgupta.com

In an industry inhabited by women entrepreneurs and designers, Ambrish Arora is a man who has left his mark through spatial planning. Ambrish has over 30 years of experience in the industry and is a well-known name among business and hospitality entrepreneurs.

Some of his most recent works include the Crafts Museum in Delhi and the Mehrangarh Trust. He is the founder and CEO of Lotus Studio and is a visiting faculty and jury for schools of architecture and design across the country and has given extensive lectures at design events in India and abroad. Ambarish has been placed in the list of top 10 interior designers in delhi.

To learn more about Ambrish, you can visit his website: Studiolotus.in

Next on this list is Lipika Sud, which is the woman behind the brands, Lipika Sud Interiors Pvt. Ltd and Dimension Designers Pvt. Ltd ‘. With over 2 decades of experience in the interior design industry, Lipika is one of the most popular interior designers in India today.

Lipika holds a degree in Economics from Shri Ram College of Commerce from the University of Delhi and a Master’s Degree in Advertising and Public Relations from the Indian Institute of Mass Communication in New Delhi. After these courses she started her career in interior design and later went on to pursue a Diploma in Interior Design from London, United Kingdom. In addition, he holds a law degree from the Law School of the University of Delhi.

To learn more about her work, you can visit her website: lipika.com

The interior design industry is one that values ​​new talents and fresh prospects far more than any other conventional industry and Tanya Gyani is the perfect example of this. A young member of this famous community, Tanya holds a degree from the National Institute of Fashion Technology in New Delhi and a master’s degree from a renowned institute in Florence, Italy.

Tania is an experienced professional and is known for her work in home interior design and home decoration. She has worked as an interior decorator in various countries around the world such as Dubai, Hong Kong and India. He currently resides in the USA and operates a boutique and interior design studio in Palo Alto, California. Tania Gyani has been placed in the list of top 10 interior designers in delhi.

Some of Tanya’s most recent works include Pottery Barn, Michael Aram, Massimo Dutti, Crate & Barrel, DLF and many more. To learn more about Tania and her work, visit her at: Tanyagyani.com

For the most part, we’ve talked about individual entrepreneurs working as a woman or a man’s army, but Aamir and Hameeda’s team is changing that. This couple is one of the most famous and sought after interior design consultants in India. They are the founders and brains behind their brand Aamir and Hameeda Interior Designers & Contractors which has a showcase of customers ranging from extremely luxurious homes to high quality restaurants and everything in between.

This powerful couple has been in the interior design industry for more than 8 years now and some of their most recent works include that of actor Sunil Shetty’s boutique called More Mischief and Allu Arjun’s farm, among others. Amir and Hameeda has been placed in the list of top 10 interior designers in delhi.

Over the years, the couple has continued to collect numerous prestigious awards, including 20 National and Regional Awards for Excellence in Design, including the Hafele Trends Excellence Award in Interior Design in 2016 and 2017, as well as many National and Regional Awards from IIID. To learn more about their life and work, you can visit them at: Aandh.in

If you have done your homework on the interior design industry in India, you have definitely come across the name Morph Design. The group’s founder and CEO, Anjum Jung is an experienced interior designer and is part of the Prestige Construction Group in India.

A graduate of the famous Cornell University, Anjum has no formal education in Interior Design, but is a self-taught artist and creator. Most of her works are in top creations of the Prestige Group such as, Prestige Silver Oak, Prestige Edwardian, Prestige Oasis Resort, Footworks Spa – Orion Mall, Angsana Oasis Spa, Oakwood Premier Prestige, Prestige Golfshire villas. Through her work and creativity, she has left her mark on the industry and has received many national and international awards.

Anjum Jung has been placed in the list of top 10 interior designers in delhi. Today, he runs one of the most well-known interior design studios in the country with a recognized clientele worldwide.

With B. Arch. By J.J. The School of Architecture, Sudhir has partnered with both national and international clients, including HSBC Bank, Corporate Office, HDFC Bank Corporate Office, Standard Chartered Bank, IRCTC Office and SEBI Corporate Office. His creative and in-depth understands of the corporate world is what makes his creations unique & very desirable.

To learn more about Sudhir and his work, you can visit him at: Architectsudhirgandhi.com

Have you ever been to Palace on Wheels, India’s most premium and luxury train? If you have, then you should know that the woman behind the design of this wonderful creation is none other than Payal Kapoor.

A decorated member of the Designers Association and a columnist for various publications such as the Hindustan Times, Pioneer Newspaper, Payal, he is a world-renowned designer. She is the founder and CEO of her brand, Payal Kapoor and through her work she has won a prestigious position in Barons ’Who’s Who of the World Global edition 2018. Payal Kapoor has been placed in the list of top 10 interior designers in delhi.

Some of her most recent work can be seen at the Palace on Wheels and the Rajdhani Express as well as cultural heritage sites such as the Umaid Bhavan, Balsamand Lake Palace, hotels such as the Imperial Hotel and schools such as the G D Goenka School, exhibition grounds such as Central Cottage Industries Corp. Ltd, New Delhi and other international schools in the country.

To learn more about her work, you can visit her website: Payalkapoor.co.in

We have kept the best for last, and this is none other than Mr. Ajay Shah. A veteran in the interior design industry with over 2 decades of experience, Shah’s expertise lies in the design based on retail. He is the founder and ceo of asda, which is the acronym for Ajay Shah Designing studios. Ajay Shah has been placed in the list of top 10 interior designers in delhi.

Ajay is known in the retail and corporate sector for his creations and in his career he has collaborated with clients such as Gemini Cinemas, PVR Cinemas, Le Mill, Tommy Hilfiger and InOrbit. Ajay is a trained professional with a degree from the National Design Institute. Ahmedabad, INDIA specializing in furniture design within industrial design.

To learn more about his work and creations, visit him at Asdswow.com

As you can see from the list above, in an industry like Interior Designers, creativity and imagination are two things that set a professional apart and help him stand out from the crowd. Although a degree can lead you to places, its vision and creativity will help you reach your destination.